You have chosen to live in a fine area of Copenhagen with an exciting, and still growing, history. 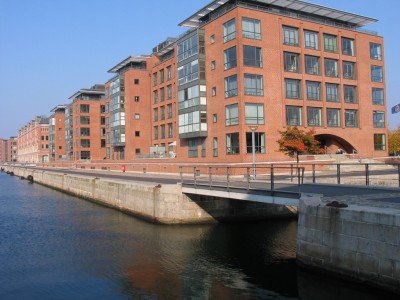 The well established architect Henry Voss (born 1929) precisely described the buildings as “a well thought out and successful piece of work that in size, character and colour relation fits in beautifully with Dahlerups Warehouse – and with its compact form resembles the condensed warehouse”. Nevertheless, Voss also felt that the buildings were “reserved” and “lacked cheerfulness”.

The 96 apartments were from the beginning only rented out. A low rent and favourable renting opportunities made it an attractive location to live, and the apartments were quickly sold. “1st generation residents” still exist in the buildings, but they are rare. Already in the building phase, the apartments were singled out to be privately owned, and in 2004, PFA decided to sell the buildings as privately owned apartments.
Two other warehouses further out on Langelinie Alle were also torn down, when SøndreFrihavn became Copenhagen’s new housing and business sector. The only warehouse to remain protected and renovated, is the Dahlerup Warehouse. It serves as the offices for the business and construction board, and houses the tax and customs museum.
At the end of the middle pier (Midtermolen), another one of architect Vilhelm Dahlerups buildings stood. It was the silo warehouse (silopakhuset) which was torn down in 1969 after a fire. The silo warehouse was considered one of the most impressive buildings in the area. It was here that a large navy of ships moored with corn from Australia to Europe – a trade route World War II set an abrupt end to. Today, the international society has been reborn in the area with 6 FN organizations residing here. Copenhagen is today the 6th largest FN city in the world with 1100 employees.
The Freeport itself with its two water-basins and raised promenade along Langelinie was completed in 1891 as a massive engineering feat, and housed many jobs. In 1970, the port kept 4000 men at work. A special part of Danish history took place here, as thousands of Danes left from here to try their luck in the USA.

The Scandinavia-America route claimed it was possible to reach America in only 9 days, compared to the old 14 and their newly built ships had space for up to as many as 1400 passengers. It is not hard to imagine how many feelings were involved every time another Dane departed the harbour. For many, it was the last time they would ever see they’re families and the motherland. Often, the Danish national anthem would sound when the ship pulled away from shore. During World War I, America lowered their quotes for legal immigrants, and “the great immigration” stopped. Passenger travel however continued all the way to the 1960’s with such memorable ships as “Stavangerfjord”, “Kungsholm” and the Polish “Batory”. Most ships to the USA moored by the cathedral “with the two towers”.

The old silo warehouse was in 1996 turned into the main offices for the County Councils Association, now “Regionernes Hus”. The address is naturally “Dampfærgevej” which means steamboat road. On the same road, the old yet impressive manufacture warehouse can be found, called warehouse 12 since 1899, which houses offices and the restaurant “M/S Amerika”.

Across from the DFDS terminal and the Oslo ferry liesAmerikaPlads (America Plaza). Close to the plaza, between 550 and 600 homes were built. Everything included, the whole Freeport area consists of about 1200 homes. On Indiakaj, ØK raised the Asia House in 1898. The beautiful building with founder H.N. Andersen’s corner office, is one of the area’s most monumental buildings. Other memorable buildings are the Freeport’s old administrations building on Indiakaj, the “cathedral” and warehouse 12 on Dampfærgevej. On the outmost spot of Langelinie lies Copenhagen’s best building site, right by the entrance to Copenhagen Harbor. It’s as if it was born for something great.
According to plan, two skyscrapers are to be built. One right by the edge, the other right across on the opposite pier. A walking bridge is meant to connect the two buildings. The winners of the architectural competition claim this is to serve as a spot for the public to observe the spectacular view. The winning projects can be seen on www.marmormolen.dk.

A whole new FN city is scheduled to be built in the Nordhavn region. It is set to be completed in 2013 and is meant to combine all FN operations in Copenhagen into one place. The FN city is to be built on a manufactured island and is a part of the skyscraper project.

Additionally, the project entails the building of more business intended buildings, privately owned homes as well as a hotel – a combined ground area of about 160,000 m2.

The oldest and most magnificent building in the area is Kastellet. It was built as a part of the city’s defence in 1662, but a planned castle was never built. The fortification consists of 5 bastions, surrounded by double moats.

The church square is considered one of Copenhagen’s finest examples of the Baroque movement. In the prison of Kastellet sat Struense after the court revolution in 1772 until he – who banned torture in Denmark – was decapitated. Griffenfeldt and Werner Best have also served prison time here. Today the fortification is home to Denmarks military intelligence unit, the “Forsvarets Auditørkorps” and the National Guard. 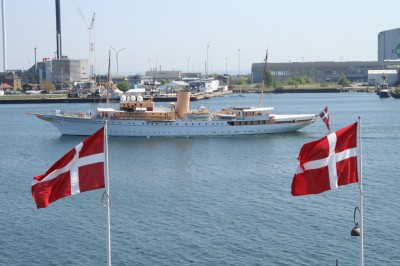 The secretary of defense lives in the commandant building. The 300 year old church has become the official church of Langelinie.
There is even more history to our neighbourhood – just outside our windows, south-east from Trekroner – stood our battle against the English in 1801. It was here that admiral Nelson turned a blind eye when told to stop firing at the Danish navy. It was also here on Langelinie that Kind Frederik the 8th walked his daily walk from Amalienborg 100 years ago. It was also here that the German army entered Denmark in 1940.

In a few years, Copenhagen has developed to become the largest destination for cruise ships in Northern Europe. A large part of the annual 675,00 visitors arrive or leave from Langelinie during the season of 1.may – 1.october.

In 2006, we became neighbours to Copenhagen’s newest tourist attraction, “the re-modified paradise”, in between Dahlerups Warehouse and Langelinie Alle 25, completed by sculptor Bjørn Nørgaard.

The board of the owner’s association Langelinie Alle 3-9 once again bid you welcome to this unique, special and historical part of Copenhagen.

This website uses cookies to improve your experience while you navigate through the website. Out of these, the cookies that are categorized as necessary are stored on your browser as they are essential for the working of basic functionalities of the website. We also use third-party cookies that help us analyze and understand how you use this website. These cookies will be stored in your browser only with your consent. You also have the option to opt-out of these cookies. But opting out of some of these cookies may affect your browsing experience.
Nødvendige Altid aktiveret
Necessary cookies are absolutely essential for the website to function properly. These cookies ensure basic functionalities and security features of the website, anonymously.
Funktioner
Functional cookies help to perform certain functionalities like sharing the content of the website on social media platforms, collect feedbacks, and other third-party features.
Præstation
Performance cookies are used to understand and analyze the key performance indexes of the website which helps in delivering a better user experience for the visitors.
Statistik
Analytical cookies are used to understand how visitors interact with the website. These cookies help provide information on metrics the number of visitors, bounce rate, traffic source, etc.
Annoncer
Advertisement cookies are used to provide visitors with relevant ads and marketing campaigns. These cookies track visitors across websites and collect information to provide customized ads.
Andre
Other uncategorized cookies are those that are being analyzed and have not been classified into a category as yet.
GEM & ACCEPTÈR